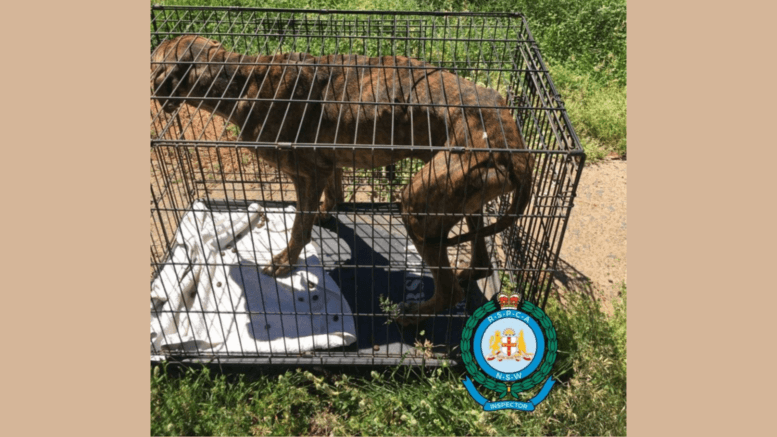 A Condobolin woman has been given a prison sentence for leaving dogs to die in her home. One surviving dog was found on the property in poor body condition. Image Credit: RSPCA NSW.

A Condobolin woman has been given a prison sentence for leaving dogs to die in her home. One surviving dog was found on the property in poor body condition.
A 28-year-old Condobolin woman was sentenced at Queanbeyan Local Court on 9 May 2022 for aggravated cruelty in relation to five dogs who died inside her home and failing to provide veterinary treatment to another dog found emaciated and alive in the backyard.
The woman pleaded guilty to two counts of aggravated cruelty, leading to the death of the five dogs.
She also pleaded guilty to one count of failing to provide proper and sufficient food, and two counts of failing to provide veterinary treatment to the one surviving dog found on the property.
The defendant was sentenced to an aggregate term of 18 months’ imprisonment, with a non-parole period of nine months, and prohibited from owning or caring for any animal for 10 years.
On 10 February 2021, RSPCA NSW inspectors executed a search warrant at the defendant’s house, in the company of NSW Police and Local Government Council Rangers.
Inside, inspectors found the remains of two white dogs in the loungeroom, covered in live maggots. On further inspection, the remains of a dog’s leg were uncovered beneath rubbish littered across the floor.
The remains of a third dog were found in the front bedroom of the property which had little skin left, barely covering the neglected animal’s bones. In the same room, a deceased puppy was found lying on the skeletal remains of another dog, bringing the total of deceased animals inside the property to five.
The brindle Bull Arab dog found alive in the yard was seized and presented to Forbes Veterinary Clinic for immediate vet treatment.
The examining veterinarian declared the Bull Arab to be in a very thin condition, weighing 27.2 kg on arrival, and determined that there had been a failure to provide proper and sufficient food to the dog for a minimum of two weeks. The dog also required veterinary treatment for an untreated hookworm infestation.
The veterinarian provided an opinion that all five dogs had died having not received proper and sufficient food and water for a period of at least four weeks.
Magistrate Clisdell, sitting in the Local Court at Queanbeyan recalled his knowledge of summer temperatures in Condobolin having sat there as a Magistrate for some time. Upon sentencing the defendant to a custodial sentence, he reflected upon the disturbing fact that the five dogs passed away in a cruel and painful manner and noted neglect of this sort calls for serious punishment.
“The defendant sentenced these animals to death the moment she decided to leave them alone for weeks to fend for themselves. It is devastating to see owners abandoning their pets to starve and dehydrate to death alone in a house,” said RSPCA NSW Chief Inspector Scott Meyers.
“No animal should suffer the same tragic fate of these poor dogs. If you suspect animals within your neighbourhood have been left alone with inadequate care, please contact RSPCA NSW immediately, so that we can investigate and help these animals before it is too late.”
The Bull Arab dog recovered in the care of RSPCA NSW and has since been adopted.
If you have animal welfare concerns, please call RSPCA NSW to investigate on 1300 CRUELTY.
RSPCA Press Release.