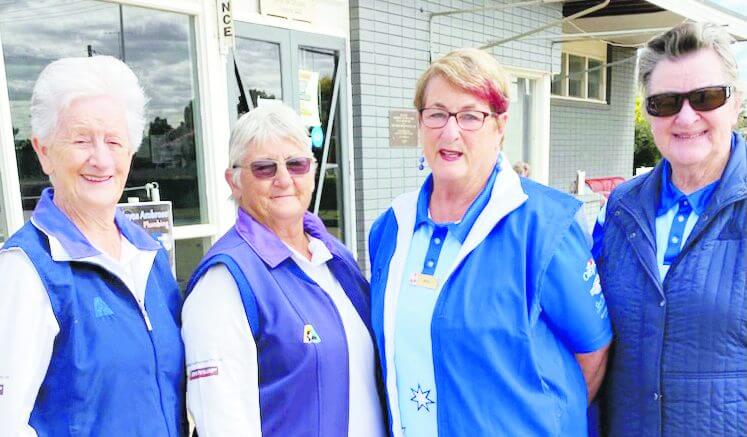 After a slow start, our girls managed to defeat West Wyalong S&C’s Meg Taylor and Helen Reid 21-16 to bring another District Championship back to our Club. Congratulations ladies.

Colleen Helyar and Judy Johnson also competed in this event and must be congratulated on their great bowls, narrowly being defeated in their round.

Social bowls, Thursday 22nd April, a game of Triples were played with Judy Johnson leading for both sides. Judy, Liz Goodsell and Beryl Field had a 14 all draw with Judy, Janelle Taylor and Colleen Helyar. The best bowler on the day was Janelle Taylor with two yard sticks.

Sunday, Anzac Day, a game in the Minor Singles was played between Cathy Thompson and Mel Rees. Cathy started the stronger, but it did not take long before Mel settled down and started to close the gap. Both players played some lovely bowls, final score, Cathy 25, Mel 18. Congratulations to both players and a big thank you to marker Wendy Ryan. Wendy commented that it was a pleasure to mark this game between two enthusiastic players.

First round of the Major Club Singles are dated, play or forfeit on or before 15th May 2021.

An Invitation to District Mixed Pairs is on our notice board. This year this event will be held at West Wyalong’s S&C Bowling Club, Saturday and Sunday 22nd and 23rd May. Have a read, you and a male partner may be interested.

On the draw for Social bowls on Thursday 29th April are Judy Johnson and Colleen Helyar.