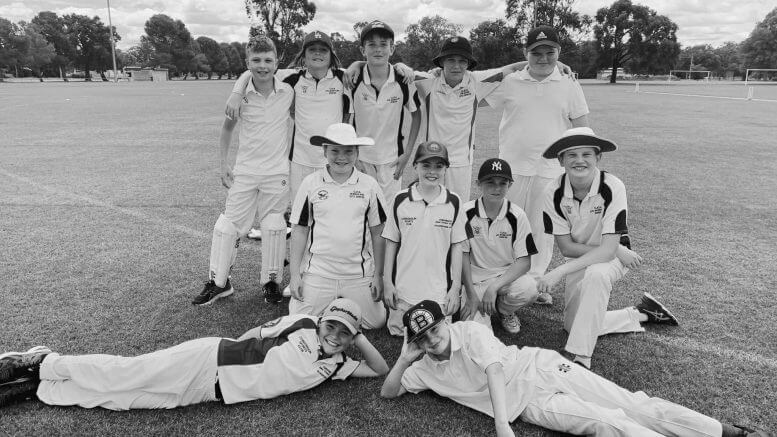 On the last Sunday in November, the Condobolin Under 12 Intertown team headed to Cowra in a must win game if they were to make the finals of the Lachlan Valley Intertown Competition for 20/21.

Cowra won the toss and elected to bat first. Charlie Taunton and Charlie Girle opened the bowling with both boys hitting the right line and length to put pressure on the Cowra batsmen which resulted in a good wicket to Charlie Taunton thanks to a nice catch from Charlie Girle in the covers. Cowra 1/8 in the fourth over. Cowra then progressed to 48 runs until Rex Shoemark (playing his first game of Intertown) sent the stumps flying with a great delivery. Cowra 2/48 in the thirteenth over. Cowra then progressed to 97 runs until the ever reliable Gus Laing removed the Cowra opening batsman Luke Beasley when Kayden Charlton-Little once again held on to a very sharp catch.

Charlie Girle then struck when reintroduced into the attack thanks to a clean bowled to have Cowra 4/111 in the 25th over.

Elijah Turner was then rewarded for the energy he shows in the field when a great throw by him saw Nate Vincent duly remove the bails to complete a very nice run out. Cowra 5/114 with six overs left. Charlie Girle then removed the dangerous Harry McDonald who had scored 34 runs when Charlie Taunton held onto a good catch. Hunter Laing then struck thanks to another catch by Kayden Charlton-Little. Another wicket to Charlie Girle when Nate Vincent took a great catch behind the wicket ( even more remarkable as he had not finished putting his gloves back on). A clean bowled to Hunter Laing and then an LBW to Hunter on the very last ball had Condo have Cowra all out for 133 runs after 32 overs.

HIGHLIGHTS IN THE FIELD:

Hunter Laing and Charlie Girle both getting three wickets each while conceding minimal runs.

Callan Venables produced his best spell of bowling to date consistently hitting the right line and length to put the pressure on the Cowra batsmen.

The outfielding and particularly the throwing arm of Rex Shoemark.

Hunter Laing and Nate Vincent opened the batting for Condobolin and both boys were dismissed by the very good opening bowler Harry McDonald to have Condo at 2/8 in the third over.

Charlie Girle and Miller Taylor then combined to blunt the attack but were having trouble scoring due to the good Cowra bowling. Miller was then dismissed soon followed by Charlie to have Condobolin at 4/28 after 11 overs. Another quick two dismissals had Condobolin at 6/28 in the twelfth over and in more trouble than Joe Burns facing Jasprit Bumrah.

Ryley Smith then combined well with firstly Gus Laing and then Charlie Taunton to give us some respectability. Ryley was dismissed for a determined 14 runs well supported by Charlie Taunton 5 and 6 not out by the ever improving Elijah Turner to have Condo all out for 74 runs with 6 overs remaining. Fifty nine runs short of the Cowra total.

Captain Hunter Laing and Rex Shoemark played their last games of Intertown as both boys head to the “big smoke” for their secondary education.

Hunter is a much improved cricketer whose greatest strength is his bowling indicated by his figures of 3/8 in his last game. He bowls with genuine heat and this combined with his line and length makes him genuinely hard to handle. He has lead the team with enthusiasm and will be missed.

Rex Shoemark only got to play one game of Intertown as he only started playing cricket this year. He has improved rapidly and is a particularly good bowler. He is a very good fielder and has the strongest throwing arm of the entire team.

Goodluck to both boys with their cricket in Sydney.

Our next game of Intertown is on the 7th of February at Condobolin against West Wyalong.