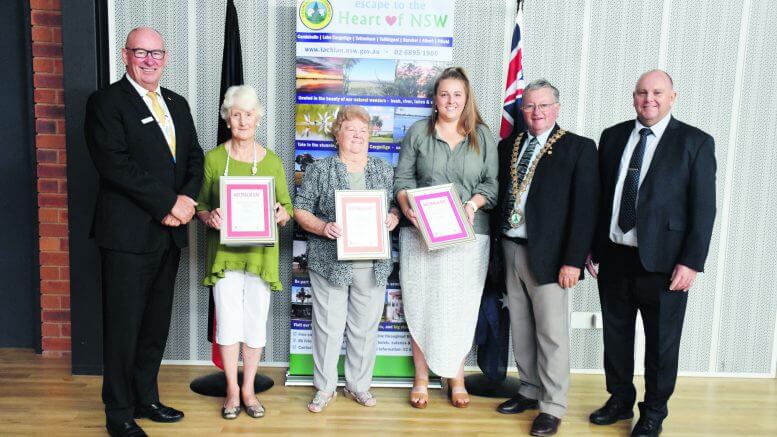 Lana Masterson, 31, from Lake Cargelligo has been named Lachlan Shire Citizen of the Year for 2021.

Allan, a former Deputy Commissioner of the Mental Health Commission of NSW and one of Australia’s most highly decorated citizens, is one of only five Australians in the past 42 years to receive Australia’s highest bravery decoration and civilian award, the Cross of Valour.

Lana is Co-ordinator of the Down The Track Program which won the NSW Youth Service of the Year award. Lana’s tireless work with disengaged local youth has won her national recognition, with national media attention being focussed on her community and the good work she does for it. Lana has also been named as an Australia Day Ambassador after being nominated for an Australian of the Year Award in the local hero category and shortlisted in the top four.

Emily, who is Secretary of the Condobolin Chamber of Commerce, continually contributes significantly to her community. She has initiated community support campaigns such as the Seed Scheme, launched an online rural job platform, overseen the Business Awards and hosted Rural Women in Business workshops. Her desire to highlight the role of rural women in business, together with her ongoing efforts to support local businesses has provided the local community with valuable opportunities to network, upskill and remain motivated during difficult times.

Gail is a volunteer for various community organisations and is incredibly generous with her time. She has made a significant contribution to the community over many years and has been described as “an unofficial ambassador for Condo and the Lachlan Shire”. Gail’s volunteering activities include working at the Garden and Floral Art Club which she helped start 30 years ago, the Community Centre, the Historical Society, the Catholic Ladies Group and at Vinnies.

After the awards ceremony, there was a free breakfast courtesy of Men of League, with tea and coffee supplied by Happy Daze Coffee Lounge.

In other parts of the Shire, Lake Cargelligo celebrated the day with a Rotary Club Australia Day Carnival at Liberty Park, which included fireworks and free goodie bags for the kids. This was followed by their Australia Day Ceremony.

Tottenham celebrated with a free barbecue and entertainment at noon at the swimming pool followed by their Australia Day Awards in the evening Yabby Races and a free BBQ were enjoyed at the Hannah Mahon Park in Fifield, with the unveiling of the Noel and Faye Green Memorial BBQ.

The Mayfield Hotel at Tullibigeal had various activities and at Burcher Hotel there was a free barbecue.