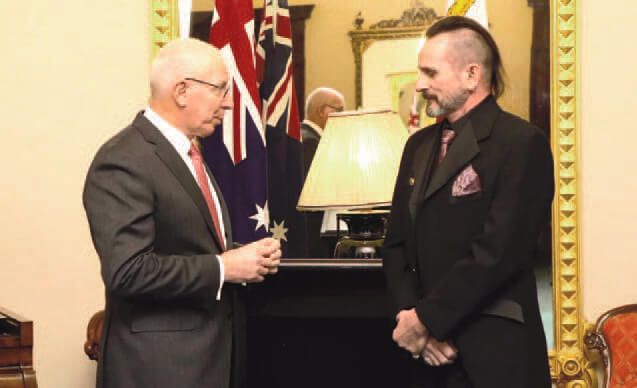 Lake Cargelligo man, Andrew Black, has been awarded a Bravery Medal for displaying considerable courage during the rescue of people from a burning vehicle near Invergordon, Victoria on 26 October 2015.
At 12:30pm, Mr Andrew Black was driving near Invergordon with his wife and young daughter. A semi-trailer approaching from the opposite direction crossed over the centre lane and collided with a vehicle travelling in front of Mr Black, shunting it down an embankment on the side of the road.
Mr Black swerved to avoid the semi-trailer, and crashed down the embankment causing his vehicle’s airbags to deploy. After checking that his wife was uninjured and able to exit the vehicle, he removed his daughter from the back seat, handed her to his wife and instructed them to move away from the other vehicles.
He approached the vehicle and saw smoke emitting from the engine bay. One of the occupants was attempting to exit the vehicle and Mr Black went and assisted him to move away from the fire that was spreading in the dry grass. The injured man informed Mr Black that the driver and another passenger were still in the vehicle.
Mr Black returned to the vehicle which was well alight and attempted to open the passenger side rear door, but it was stuck. Despite his condition the injured man also returned to help Mr Black.
At this time the back seat passenger moved to the smashed rear window and Mr Black jumped onto the burning vehicle and pulled the man out by the shoulders. The other man assisted in moving him away.
Shortly afterwards the vehicle was engulfed in flames and sadly the driver did not survive.
Story and Image Courtesy of Lake News.