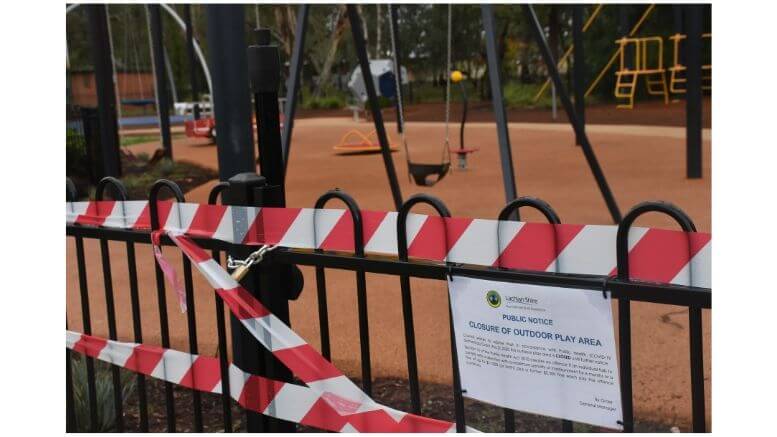 The Peter 'Yabby' Riley Adventure Playground in Condobolin has been closed to the public until further notice. Image Credit: Melissa Blewitt.

All playgrounds and skate parks across the Lachlan Shire are now closed, as the Federal Government looks to slow the spread of COVID-19.

Outside gyms in public places have been closed as of midnight on Monday, 30 March 2020. Bootcamps are now restricted to two people, including the trainer.

A limit of two people at both indoor and outdoor gatherings is now also in place. Exceptions to this limit include people of the same household going out together, a maximum of 10 people at a funeral and a maximum of five people at a wedding.

The Federal Government sent a strong message to those who are over 70 in the Lachlan Shire and around the country.

“The care and wellbeing of senior Australians remains a priority in this uncertain time,” Prime Minister Scott Morrison said in a media statement on Sunday, 29 March, 2020.
“All Australians respect and value the contribution that older Australians make to our community.

“Coronavirus has more serious impacts on older Australians, those over 70 years of age and Australians with existing health conditions or comorbidities.”

He also said these groups should limit contact with others as much as possible when they travel outside.

Prime Minister Morrison also urged all Australians to stay home unless for shopping for food and necessary supplies, medical or health care needs including compassionate requirements, exercise in compliance with public gathering requirements and work and study if you can’t do so remotely.

Prime Minister Morrison said the National Cabinet and the Federal Government were taking further action to slow the spread of coronavirus in an effort to save lives and livelihoods.
“We will be living with this virus for at least six months, so social distancing measures to slow this virus down must be sustainable for at least that long to protect Australian lives and help Australia to keep functioning,” he explained in the media statement, released on Sunday, 29 March, 2020.

“Our public health measures are taking effect, with over 211,000 tests undertaken and 3,966 confirmed cases in Australia.

“The rate of increase in the virus curve is slowing, but overall numbers are still increasing. While the majority of cases in Australia are connected to travellers returning to Australia from overseas, there has been some sustained community transmission in areas of Sydney and Melbourne.

“National Cabinet welcomed the new coronavirus app and WhatsApp channel that were released today by the Commonwealth Government. The app is now available on Apple and Android devices. The WhatsApp channel can be accessed by entering aus.gov.au/whatsapp into your internet browser.

“These new platforms provide a trusted source of information for Australians looking for important advice on how they can protect themselves and others, current restrictions on social gatherings, how they can access support and the latest data on Australian cases.

“The app also allows Australians to voluntarily register if they are self-isolating to provide governments with important information to protect public health and safety.

“National Cabinet noted that there have been significant measures put in place that restrict gatherings including limits on retail premises. In some jurisdictions, retail outlets need to be prepared for further measures and adapt to different ways of engaging customers such as online and home delivery services.”