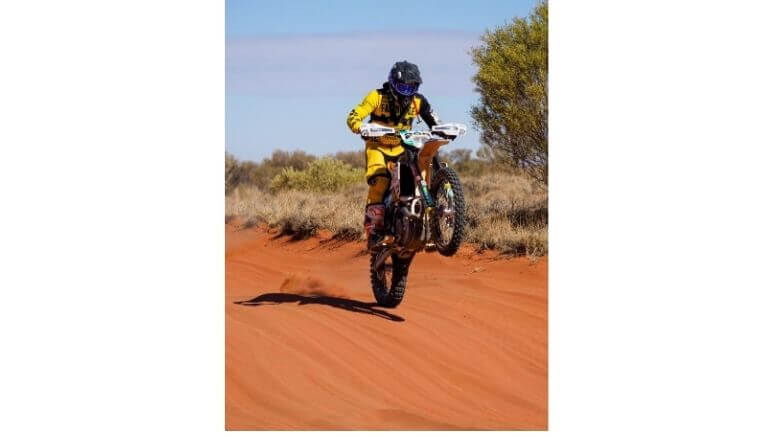 The 2020 Tatts Finke Desert Race may have been cancelled, but that hasn’t stopped Condobolin’s Jacob Smith preparing to conquer the challenging course in 2021.

A journeyman of the sport, Jacob finished on the podium last year in second position after consecutive DNF’s in 2018 and 2017, and he will be looking to go one better next time around.

The Tatts Finke Desert Race is an off road, multi terrain two-day race for bikes, cars, buggies and quads through desert country from Alice Springs to the small Aputula (Finke) community and back again.

The race is held each year on the Queen’s Birthday long weekend in June and is one of the biggest annual sporting events in the Northern Territory and has the reputation of being one of the most difficult off road courses in one of the most remote places in the world.

Jacob has never won the Tatts Finke Desert Race, but has ambitions to hold aloft the winner’s trophy.

“I want to win one before I hang up my racing boots. That is my ultimate goal,” he said.

“There is a lot of prestige and history associated with the Finke Desert Race.

“It is just one of those races. Obviously I have done 10 in a row and I haven’t won one yet, so I really want to win one.

“The track is really rough, but that is one of the things that makes you want to succeed and conquer it. The route is part of the challenge.

“To be able to win that race would be unbelievable – to be King of the Desert would be the top of my career. It’s hard to explain how the race makes me feel, but I just love the atmosphere and the comraderie of the event.

“You get to go away for pre training, and spend time in the desert with no mobile phones, just riding your bike. All of that aspect is what is so good about the race.
“It is definitely becoming a world renowned race. Everyone from around the world who has a dirt bike knows about it, and has aspirations to conquer the course. It is definitely prestigious and something I want to add to my list of achievements.

Jacob has competed in the event for the past 10 years in a row. However, COVID-19 meant that the Tatts Finke Desert Race and many others competitive contests were cancelled in 2020.
While the circumstances have made it difficult to train, Jacob has persevered during difficult times.

“I was preparing as I per normally would every season and then when COVID-19 struck it was a bit up in the air on what was going to happen,” he explained.

“Events got cancelled quite quickly in the grand scheme of things. They pulled the pin on Finke quite early, so I knew that was not going to happen but I didn’t think everything else would get shut down straight away.

“So I kept training as I was going to be racing. It was only, I guess, a couple of weeks later I got a call from Husqvarna and they said pretty much everything for the year was done basically. So my contract was pretty much voided, but everything that I had been given up until that point as per my contract was still above board, but after that, that was it.
“It has been quite hard to stay motivated, if I am totally honest.

“To know there would be no racing, and Finke was my major event for the year and basically my contract had been voided – it was tough to stay motivated, keep fit and be interested in racing.
“I sort of lost interest for three or four weeks. I haven’t done much riding to be honest as there is not much happening this year.”
Jacob admits there have been times when it was challenging to keep motivated when he hasn’t been racing.

“I have still been training with Logan Thorpe Fitness. It was also tricky when the gyms faced strict guidelines during the COVID-19 restrictions,” he stated.

“I had to work out a plan to do it on my own and Logan helped with Zoom training lessons. Then when they eased a bit I could work with Logan at the park and that type of thing.
“I have tried to keep active because that is what I like to do. It was quite hard to stay motivated. It is funny because this is the longest stint I have ever had off the bike or nor racing competition when I have been healthy.

“Normally when I have a break from racing I am injured or something has gone wrong, so it has been a little taste of what retirement may look like for me.
“I am getting closer to retirement, that what I was a couple of years ago, so that is something I have started to think about the line. I don’t want to retire yet, but in two or three years time I might have to look at stepping away from racing professionally.

“This time has given me a bit of insight into what life will be like without having racing or competition. It’s not that fun to be honest.”
The birth of his first child has also helped Jacob navigate this unusual period.

“I have been lucky because I have had the birth of my first child. My wife and I had our first born in February,” he revealed.

“That has taken up a lot of my time. If had been a normal year, and we didn’t have our first child I think it would have been a fair bit tougher.

“But he has been able to take a lot of my focus away from racing, which is good. In one sense, I am actually fortunate it fell this way, the whole season has been cancelled and I have had time to spend with my wife and son.

“That has been the very big positive to not having a racing season this year. I feel that when I do go back to racing, my family life will have a routine, and I will be able to focus back on racing.

“It has been a very up and down kind of time, that is for sure.”

Jacob has hopes he will be able to return to his normal racing schedule next year.

“I am really hoping I can get back to my regular racing schedule next year, which is the Condo 750, Finke Desert Race and I was looking at doing a new race down in South Australia, which is a 24 hour reliability race,” he articulated.
“It will run for 24 hours. It starts at 11am and you ride all through the night with lights. It will be a bit of a new challenge for me.

“The next couple of Finke’s I am trying to lock myself into. That is my main race for the year. However, Yellow Mountain and Condo 750 will definitely be on the calendar as well. Hopefully we can make it happen.”

While there has been little racing action in 2020, there is one event Jacob may be able to compete in this year – the Sunraysia Rally.
“I am actually doing a race in September, if it still goes ahead. It is called the Sunraysia Rally,” he said.

“This will be the only big race I will have for the year. Which is sad, but that is just the way things go sometimes.

“Sunraysia will be my only major event for the year and then I plan to work towards the 2021 Finke.”
He also has aspirations to return to have a crack at the Dakar Rally.
“I do have aspirations to go back to Dakar at some point hopefully,” Jacob said.

“Obviously the 2021 Dakar is out of the question as it is run in January, and who knows what is going to happen then.

“If I am ever to make it happen I think the following year would be the one to pull it off. That would be sort of like the last hurrah for my career, I guess.

“I don’t want to be too selfish and keep racing and take away time from my family life indefinitely.”