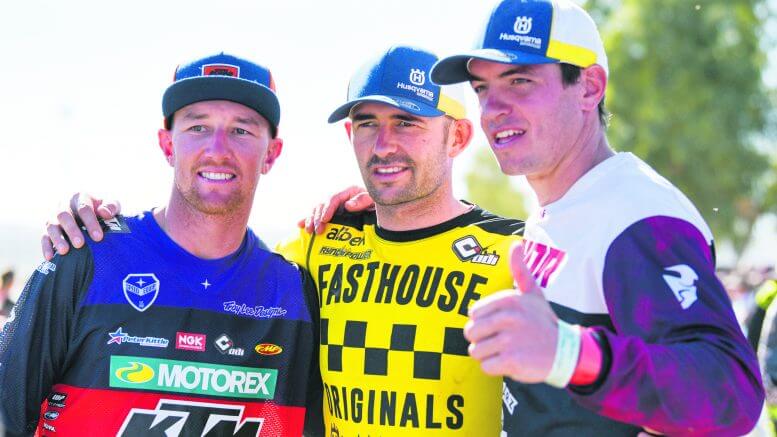 Condobolin’s Jacob Smith is looking to conquer the challenging course of the 2021 Tatts Finke Desert Race.

A journeyman of the sport, Jacob finished second on the podium in 2019 after consecutive DNF’s in 2018 and 2017, and he will be looking to go one better this time around.

The Tatts Finke Desert Race is an off-road, multi-terrain two-day race for bikes, cars, buggies and quads through desert country from Alice Springs to the small Aputula (Finke) community and back again.

The race is held each year on the Queen’s Birthday long weekend in June and is one of the biggest annual sporting events in the Northern Territory and has the reputation of being one of the most difficult off-road courses in one of the most remote places in the world.

Jacob has never won the Tatts Finke Desert Race, but has ambitions to hold aloft the winner’s trophy.

“I want to win one before I hang up my racing boots. That is my ultimate goal,” he said.

“There is a lot of prestige and history associated with the Finke Desert Race. I will be certainly having a crack at winning the title.

“I will be doing the best I can to win the race. If I win the race, who knows, I maybe even able to retire. We will just see how we go.”

Jacob added he had already spent a week training on the Finke track earlier this year.

“I have already seen the track, had a chance to set up my bike and make sure everything’s good,” he said.

“They have done a lot of work to the track so it is not as rough as previous years.

“Actually I think the gap between all top riders will be a lot less. I think in 2019 there was maybe an hour between the top 20, which is quite a large gap. Whereas this year I don’t think there will be gaps like that this year because of the way the track has been prepared. It will be very interesting to see what happens, actually.

“It is still going to be rough but just not as much as previous years.”

While COVID-19 put an end to events in 2020, Jacob persisted with conditioning training.

“During COVID-19 there wasn’t much opportunity to train. As soon as everything got cancelled, I then didn’t ride a bike for six months,” he explained.

“Now everything’s back to normal. You don’t forget how to ride a bike. I trained with Logan Thorpe at Logan Thorpe Fitness. I have been doing plenty in the gym. So it was just the riding I didn’t do as much of.

“I am back up to speed now and everything is going well.”

Even though last year proved extremely challenging, it held newfound joy, with the birth of his son Bodhi.

“My wife and I had a baby in 2020. It kind of worked out really well for me as I got to have a full year with Bodhi and we could concentrate on being first time parents,” Jacob stated.

Despite being finishing on the podium a number of times, he has a burning desire to claim victory in the renowned event, just like his brother Todd.

“So I have been on the podium a couple of times. Basically I am going back to have a crack a winning the title. I will be doing the best I can to win the race. If I win the race, who knows, I maybe even able to retire. We will just see how we go.

“There is no set date on my retirement yet. Winning Finke is just one thing I want to tick of the list before I do retire. If I don’t win, it is what it is. It one of the hardest races to win in Australia, so it’s definitely not easy, but I am going there to give it a red hot crack anyway.”

One of the best aspects of competing at this year’s Finke, will be that his brother Todd will be joining him.

“Todd is going to race again. He is just looking forward to getting away. There is no expectations for him he doesn’t care what place he may come, he just wants to compete. He hasn’t raced since 2016. It would be four or five years since he has raced. Half the reason we are competing. Todd and I are driving up together and going to camp out of our race truck at a caravan park. We get to go riding together for the week which is pretty cool.”

As for finishing ahead of Todd in this year’s Finke?

“I have been putting in the work and done a lot of training, so I would like to think I could finish ahead of him, but you never know. He could just pull out a great ride,” he articulated.
However, Jacob admits it would be nice to be able to take top spot, as Todd has already a Finke trophy to his name.

Jacob has been involved in motor sports for most of his life, and he still has the yearning to compete a top level and win races.

“My enthusiasm has not waned at all,” he advised.

“I have been riding dirt bikes since I was three years old so it’s pretty much been my life. Desire is still there to do well and of course I have other things going on in my life that I need to focus on other than racing. But when I put the helmet on and when it’s time to go then it all goes back to normal.

“I would love to attempt another Dakkar, but that is simply not going to happen with the way the world is at the moment.

“There is COVID-19, the cost and then I have got family at home too. There is really not much more that I would like to achieve in the sport. It’s more about enjoying it and having fun.

“I am actually looking at doing a 24 hour race in Adelaide in July, which is a race I haven’t done before so that would be another thing I would like to tick off the list.”

“Six local guys going up which is really good. I think it is the most participants we have had at one Finke from our local club which is nice,” Jacob said.

“Charlie Weber came with me for the pre run in early May. We drove up and spent some time on the track which was nice to be able to help some kids out that actually have not been there before.”
After being in the professional ranks for the past decade, Jacob believes the best advice he could give is to give everything 100 per cent.

“For any kids that are coming through I always say you have the make the most of your opportunities whatever they may be,” he revealed.

“You are in a sport where you just never know what might happen so you always give it your best every time you put the helmet on or strap the footy boots on or whatever you are choosing to do.

“If you are going to go to the highest level then you have to work hard for it and make sacrifices. Make sure you give it you all every time you are out on the field or out on the bike or whatever you are doing.”

Jacob is adamant that while he has enjoyed his time in racing, he could not have done it without the support of his family.

“I have been very, very lucky, with family support especially working in the family business, whenever I need time off it is all good. I am very lucky to have family support, my wife’s support and Bodhi’s for that matter. It was really was my first time away from my family in 15 months when I went up to practice. It was the first time I have been away for racing for more than a few nights so that was a whole new experience for me as well,” he said.

“If I didn’t have support I just couldn’t do it. I am very, very lucky in that sense.”