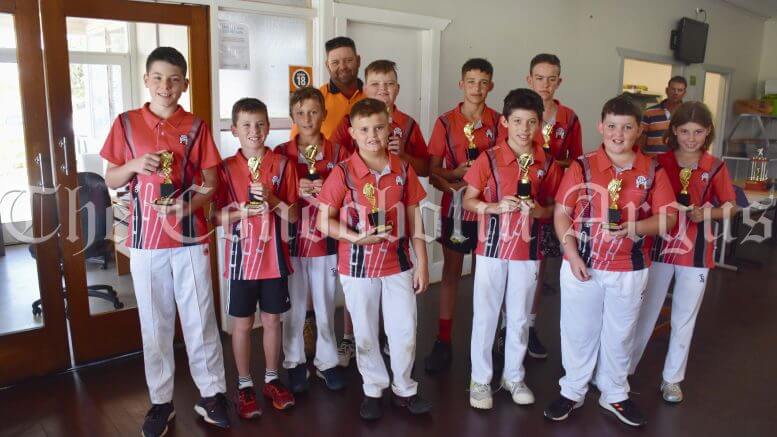 The Gilgais (with Coach Jack Taylor) were the winners of the Primary Grand Final. The Grand Final was played at the SRA Soccer Ground on Saturday, 19 March. Image Credit: Melissa Blewitt.

Junior Cricket
Primary Grand Final 19-3-22
Gilgais and Waratahs came face to face in the Grand Final on Saturday 19th March at the SRA Soccer Ground. Waratahs won the toss and elected to bat, the Tahs were off to a bit of a slow start and it wasn’t until the 5th over that the team managed to reach double figures. There was some great bowling by the Gilgais side, Baden Riley bowled a maiden in his first over. The team were desperate for a wicket but the Waratah batsmen managed to get five retirees back to the bench before Gilgais took their first wicket in the 12th over.
Callan Venables was caught & bowled by Baden Riley and the following over saw Sid Shoemark bowl Memphis Jones, the next over Chloe Stuckey was bowled by Alex Worthington and Waratahs were 3/34 off 14 overs.
The team lost their 4th wicket when Archie Ryan bowled Rueben Sloane and this saw retirees Eli Heffernan and Kade Haworth form an impressive partnership. The pair were getting some much needed bat on ball, running quick singles and making boundaries, with Eli hitting his first 6.
The boys were looking like there was no stopping them until Miller bowled his fourth over and sent Eli from the field.
The Waratahs finished on 121 runs.
Best batters; Kade Haworth 38 n.o & Eli Heffernan 30.
Wickets went to; Archie Ryan 1/4 off 2 overs, Sid Shoemark 1/5 off 3, Alex Worthington 1/9 off 2, Baden Riley 1/8 off 4 & Miller Taylor 1/24 off 4.
Next came Gilgais turn at the crease and the run rate was a bit slow to start off with but the team showed persistence with the bat and soon got the tally headed in the right direction.
Memphis Jones took the only wicket for Waratahs when he bowled Archie Ryan and this saw Gilgais 1/49 off 13 overs.
Ryley Smith and Miller Taylor showed what a great partnership looks like, hitting quite a number of boundaries and running well between the wickets, the cousins managed to put on 82 runs.
The 27th over saw Gilgais claim the win, passing the total made by Waratahs and finishing 1/125.
Best batters; Miller Taylor 48 n.o, Ryley Smith 34 n.o and Sid Shoemark 11 n.o.
Wicket taken by; Memphis Jones 1/4 off 3 overs.
Miller Taylor was awarded Player of the Match.
Congratulations Gilgais.
Contributed.