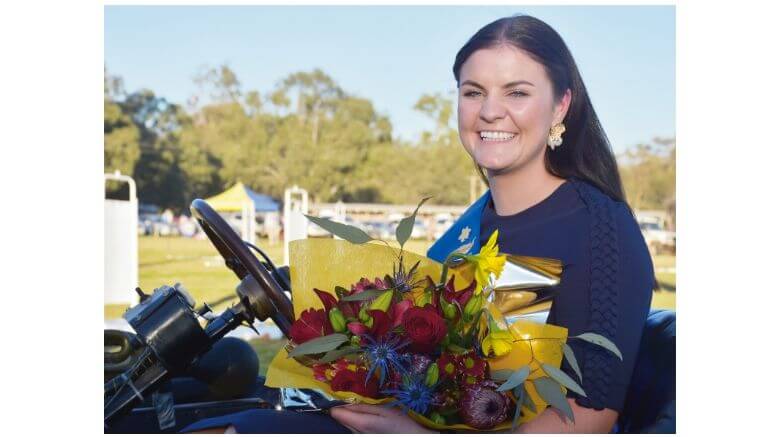 The 2020 Condobolin Show will not be held. This will be the tenth time in the association’s 135-year history that the Show has been abandoned. Previously it had been cancelled on account of the First and Second World Wars, drought and flood, and most recently the 1990 flood. ABOVE: Reba Nicholson was announced as the 2019 Condobolin Showgirl at the annual Show Ball, which will also not be conducted this year. She will retain her title until the next Show. Image Credit: Melissa Blewitt.

The 2020 Condobolin Show has been cancelled.

This was the result of a motion unanimously passed at the Condobolin PAH and I Association Inc Zoom video Annual General Meeting on Thursday, 28 May.

“The resolution was that In the interest of public health and safety and with the restrictions in place for public gatherings due to the COVID-19 pandemic, the 2020 Show (and Show Ball) be abandoned,” Secretary Carol-Ann Malouf OAM explained.

“It was agreed that cancellation was the most prudent decision and with no clear path to the full easing of social restrictions, it was believed this was the only course of action.

“With the uncertainties under which we are presently living it will be increasingly difficult from this point on for the committee and volunteers to undertake the required organisation.

“Many of you, including exhibitors and competitors, plan well ahead for the show each year so we have also been conscious of giving sufficient notice of the changed circumstances,” Carol-Ann said.

This will be the tenth time in the association’s 135-year history that the Show has been abandoned. Previously it had been cancelled on account of the First and Second World Wars, drought and flood, and most recently the 1990 flood.

Five August shows in the Central West Group, Tullamore, Trundle, Bedgerabong, Peak Hill and Condobolin have now been cancelled as a result of COVID-19.

“After three years of drought we had been hopeful the show would be a cause for celebration and bring an injection of income to the town and district as well as providing the usual great meeting place for locals and visitors, an event that is so keenly anticipated by many, none more so than our children,” Carol-Ann Malouf said.

“Now, that will be next year – and planning will continue very shortly. We hope we can look forward to seeing you at the biggest and best-ever Condobolin Show on Friday, 27 and Saturday, 28 August 2021 and we thank the community for your support.”

The Condobolin PAH & I Association was selected to host a regional Final of the Sydney Royal Showgirl Competition in February next year but with the cancellation of this year’s Sydney Royal, the Royal Agricultural Society also cancelled the 2021 Showgirl Finals.

“Instead, those finalists will now contest next year’s State final at Sydney Royal,” explained Carol-Ann.

“We now look forward to hosting the 2022 Zone 6 Showgirl Final where Condobolin will be represented by our 2021 Showgirl.

“In the meantime we are delighted that our current Showgirl Reba Nicholson will retain this title until our next Show.”