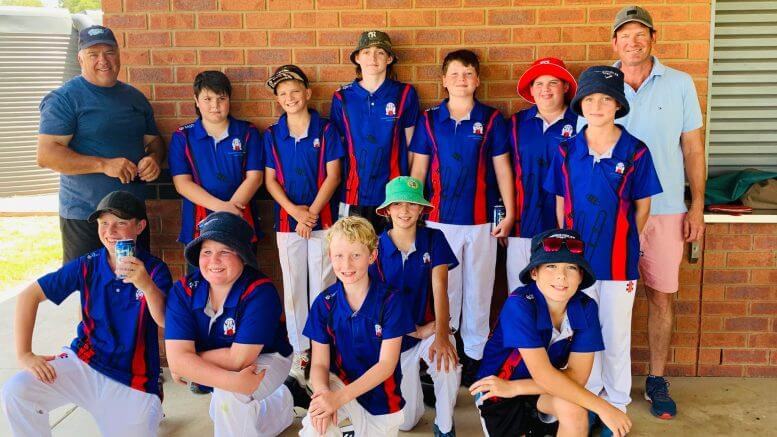 The Colts team with coaches Tom Turner (left at back) and Warwick Laing (right at back) after their win over Trundle on 19 February. Image Credit: Alese Keen.

Junior Cricket
Colts vs Trundle 19-2-22
Colts won the toss and elected to bat, the game took place on the Turf at the SRA Ground. Brothers Brock and Levi Shultz were the opening batsmen, bowling by Halloway saw Brock dismissed in the third over.
Nate Vincent and Gus Laing proved to be a formidable partnership both retiring after putting a number of runs on the board. Colts gradually increased their score and eighth batsman Jaren Blewitt hit some boundaries to give the score more of a boost. Colts batted out their 30 overs finishing on 5/150 runs.
Nate Vincent top scored on 53 n.o, Gus Laing 32 & Jaren Blewitt 21 n.o.
Trundle’s turn to bat and they were faced with a team who weren’t going to let much get by them, the Colts bowled well putting the pressure on Trundle from the start.
Harvey McFadyen took the first wicket, the second went to Billy Baldwinson and a third to Ellijah Turner. Some great work in the field and good tight bowling by the team, made it hard for Trundle to put the ball away for runs. Lucy McFadyen took the first of what was to be her 2 wickets for the game and Nate Vincent took the next.
Trundle finished on 57 runs with C.Dunn top scoring on 19.
Bowling for Colts; Lucy McFadyen 2/9 off 3 overs, Harvey McFadyen 2/6 off 3, Billy Baldwinson 1/0 off 2, Ellijah Turner 1/5 off 4 & Nate Vincent 3/2 off 3. Catches were taken by Ellijah, Billy, Nate and Levi.
Contributed.