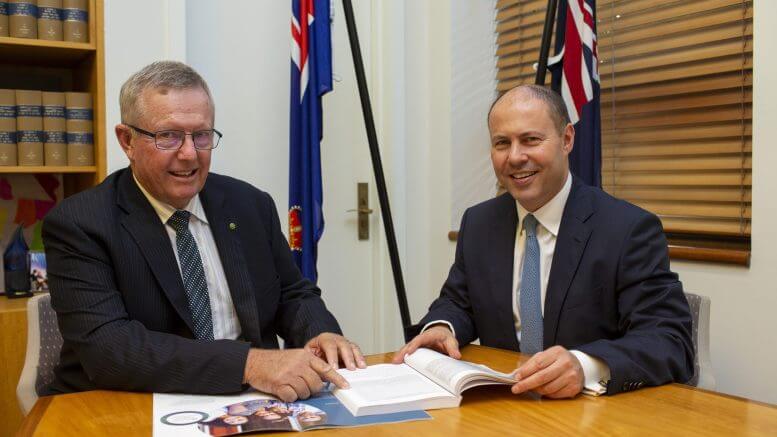 Federal Member for Parkes Mark Coulton has welcomed the 2022-2023 Federal Budget, which he said will drive the growth of towns and communities across the Parkes electorate, including the Lachlan Shire.
The Budget, which Treasurer Josh Frydenberg handed down on Tuesday, 29 March focused on providing cost of living relief, creating more jobs, guaranteeing essential services and keeping Australians safe, according to Mr Coulton.
“This Budget marks the next stage in leading Australia’s strong economy into the future and proves the Coalition Government continues to deliver for the people of the Parkes electorate,” he stated.
“With the pandemic and the invasion of Ukraine, Australian households are under pressure due to the cost of living. We’re helping Australians deal with these costs by delivering more jobs and putting upward pressure on wages, providing a one-off cost of living tax offset and a one-off cost of living payment for Australians most in need. By reducing the stress of high fuel prices on household budgets, reducing out-of-pocket expenses for child care, delivering more affordable energy, helping aspiring home buyers and reducing the cost of and increasing access to medicines.
“We’re also making record investments in health, education and other essential services; building roads, rail, dams and the renewable energy technology we’ll need for our future; and investing in stronger defence, borders and security.”
Key investments that will deliver direct benefits in the Parkes electorate, according to Mr Coultoin, include:
•Tax relief of up to $1,500 for 55,800 taxpayers in the Parkes electorate
•A $420 cost of living tax offset for low- and middle-income earners
•A one-off cost of living payment of $250 for Australians most in need, including 18,628 pensioners, 7,342 disability support recipients 2,537 carers, 10,263 jobseekers, and 15,996 eligible self-funded retirees in the Parkes electorate
•A 50 per cent reduction in petrol and diesel excise and excise equivalent customs duty for six months
•More than doubling the successful Home Guarantee Scheme to 50,000 places per year, which includes helping another 35,000 first home buyers build a new home with a five per cent deposit, supporting an additional 5,000 single parents to purchase a home with a two per cent deposit, and a new Regional Home Guarantee for 10,000 eligible homebuyers to purchase or construct a new home in regional areas
•$365.3 million to help an extra 35,000 trade apprentices and trainees into training
•$99.3 million for 80 additional medical Commonwealth supported places at rural campuses. The University of Wollongong and the University of Sydney which operate medical school programs with rural clinical school locations in Broken Hill and Dubbo will be eligible to apply.
•The deregulation of Magnetic Resonance Imaging (MRI) licencing, which will allow Medicare-subsidised MRI services to be delivered in Broken Hill from 1 November 2022
•$811.8 million for a new Connecting Regional Australia to address mobile blackspots along approximately 8,000 kilometres of regional transport routes and adjacent premises and businesses, improve the resilience of telecommunications infrastructure against natural disasters, and encourage new technology trials
•$523.3 million over four years to reduce the Pharmaceutical Benefits Scheme Safety Net thresholds
$501.7 million to extend the Local Roads and Community Infrastructure Program to support local councils to maintain and deliver social infrastructure, improve road safety and bolster the resilience of the local road network
•$480 million investment towards upgrading the NBN’s Fixed Wireless Network and Satellite services
•$480.1 million over six years to fund programs to support women and their children who are experiencing family, domestic and sexual violence
•A further $468.3 million to continue implementing the Government’s response to the Royal Commission into Aged Care Quality and Safety
•$345.7 million for residential aged care facilities for pharmacy services
•$285.5 million over five years for mental health treatment initiatives
•$264 million for heavy duty upgrades along the Newell Highway north of Moree
•$170.2 million over five years for preventative health initiatives
•$131.3 million over five years to update the Medicare Benefits Schedule
•$98 million to meet increased demand for the Community Development Program that provides employment services to Indigenous and non-Indigenous remote job seekers
•A record $58 million will be invested to establish specialised endometriosis and pelvic pain clinics in every state and territory to improve diagnosis, care and treatment
•$52.3 million in funding for Lifeline Australia over four years from July 2022
•$46.7 million over two years for suicide prevention activities
•$33.3 million over four years to the Royal Flying Doctor Service to support emergency aeromedical services as part of establishing a new 10-year Strategic Agreement with the RFDS
•$29.2 million for round eight of the Stronger Communities Programme which provides funding of between $2,500 and $20,000 for small capital projects that deliver social benefits for local communities
•$22.1 million over four years to increase CareFlight’s and Little Wings’ capacity to deliver aeromedical services
•$20.1 million over three years to strengthen on-farm biosecurity by supporting the adoption of livestock traceability reforms
•$20 million over four years to reduce the impact of pests and weeds on agricultural productive, native wildlife, the environment and the community
•An additional $20 million for future priorities within the Toowoomba to Seymour corridor as part of the Roads of Strategic Importance (ROSI) initiative.
•$19.4 million to establish up to 20 child care services in regional and remote areas where there is an absence or limited supply of child care
•$15.4 million over two years to extend the Supporting Agriculture Shows and Field Days program
•$14.8 million over four years to support Charles Sturt University to deliver a Rural Clinical School
•An additional $14.6 million for the Pooncarie Road to Menindee Upgrade
•$11 million over two years to modernise Indigenous cultural heritage protections
•$10 million over two years to establish the Journalist (Cadetship and Training) Fund to support broadcasters and publishers to hire, train and upskill cadets and journalists to support public interest news in regional Australia
•$6.6 million over two years to expand the AgMove program and extend it to December 2022 to support more eligible job seekers who relocate to take up short-term agricultural work
•$2.1 million for the renewal of funding for the National Rural Health Student Network