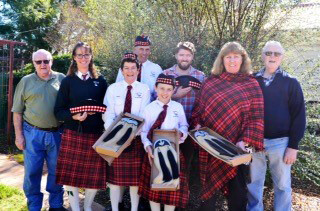 In December 2019 Kay and her husband Nick visited Condobolin and met up with Brian Colless and Heather Blackley. They were thrilled to see that the Condobolin RSL Pipe band was still going and that the Band was still wearing the MacKinnon tartan.

Archie MacKinnon was Kay’s father, and he was a teacher at Condobolin high school in the early 50s. He taught Alun Crook and many others from Condobolin. Archie had a connection with Condobolin as he boarded at Mrs Days boarding house when he was in high school with Jimmy Donnelly and Lachey Reynolds. Archie was very bright and got a scholarship to go to university at the age of 15.

Unfortunately, George MacKinnon passed away at the end of 1965. As he had been President of the RSL Club and involved in the formation of the Pipe Band it was decided to adopt the MacKinnon tartan. This tartan is still worn today. The Condobolin RSL Pipe Band first played in the MacKinnon tartan in 1966 after the Caledonian Band ceased playing.

After Kay’s father, Archie MacKinnon passed away, they approached the Pipe Band to offer them a donation to purchase new equipment. In May 2021, Kay, and her husband Nick, returned to Condobolin and presented the new equipment to Band members. This equipment was ordered from Scotland and consisted of new horsehair Sporrans and new Glengarry hats.

The band met at the home of Brian Colless with both the youngest, the newest and the oldest Band members. The group had a wonderful morning tea and included lots of stories of Alun Crook going to Condobolin high school with Archie MacKinnon as his teacher.

The band is very appreciative of this generous donation coming from the MacKinnon family and we thank Kay and Nick for offering the equipment which will be used for many years.