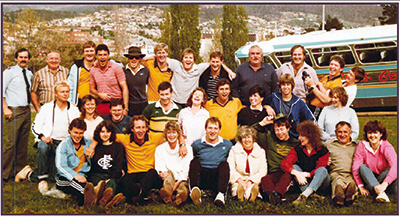 Condobolin Rugby went on a tour of Tasmania in 1984 for their end of year trip. Image Credit Belinda Neal

I started playing rugby in Condobolin in 1982 at the invitation of Peter Gordon. My wife, Kim, and   I had moved to Wolstan, which was across the road from Euglo Station where the Gordons lived. The Gordon family were great support for us in those years and also great supporters for Condo rugby.

My first game with Condo was at Cobar for a practice match. It was probably about 40 degrees on the field when we started. I hadn’t played for a couple of years and I thought I was going to die. It was also my first experience of having a female strapper, Judy, in the dressing room. Her insistence on dressing any wound with Mercurochrome had most of us running to shower as quickly as possible.

The road trips were always great fun. My earlier years playing for West Wyalong didn’t include bus trips. So this aspect of Condo rugby was new. We had many great trips away. A trip to Quirindi is one that many players and partners of that time will remember. During my first couple of years with Condo, Phil Tooth was the coach. Phil had learned his rugby at school at Riverview in Sydney. His knowledge of rugby had a significant impact on the young club and the style of rugby we played. He was passionate about the game and was very vocal on the sideline when he did not agree with the referee. He was sent off as coach more than once.

John and Anne Tunks, Ross and Gai Berry and Carol-Anne Malouf followed us all the way to Tasmania in 1984 for our end of year trip. The Tassie trip was a highlight for many of us. A great group  of people out for a good time. Kim still marvels at Wayne Galvin’s skill in carrying tray after tray of Bundy and coke to the top deck of the boat we were on exploring the Franklin River, despite rough seas. We played games in Hobart and then Melbourne and managed to fit sightseeing in with having lots of fun. My memory is that the trip served as the start of some long term relationships.

There were many supporters who came along each week. Especially to our home games. I think rugby provided a great release from the ups and downs of the seasons and other pressures. People like Mick and Caroline Malouf were the backbone of the social success of the club. So to were many of the players partners. The meals in Condo after the games were seen as something special by other teams. I also remember some very eventful trips home with Craig Ridley in his little Mini Moke. I can remember approaching one bridge with a number of kangaroos on it and not knowing how we finished up on the other side without hitting any.

We would be always keen to see who the new school teachers, fish farm and Soil Con workers were. We had players from New Zealand and South Africa with us at different times.

One highlight of this time was Rob and Belinda Neal’s wedding. I think we must have been in a semi- final in Condobolin that day. Four or five of us played the game and then jumped in a small plane and flew to Wagga Wagga for the wedding. No, Rob didn’t play.

Through much of my playing days with Condo, I also played with South West Zone. Bede Tooth, Danger Seaton, Vinnie Gordon, and Ken Hall also played zone during these years. We had some very enjoyable trips to Country Week. In 1989  and 1990 I also coached South West. Mick Turner, Vince Gordon, and Mathew Morris played during these years. Bernard Wykes helped me out as manager of the team for Country Week in Tweed Heads in 1989. It was a great pleasure playing  again  in  1993 and 1994 with Vincent Gordon as coach. We had a very strong playing group and enjoyed good success throughout the season. We lost both grand finals in the closing minutes of the games to penalty goals.

Both games were against Grenfell.

Condo Rugby was a big part of our lives for over a decade. Rugby provided a diversion for us when times were difficult for one reason or another. It also provided a place to celebrate with friends.