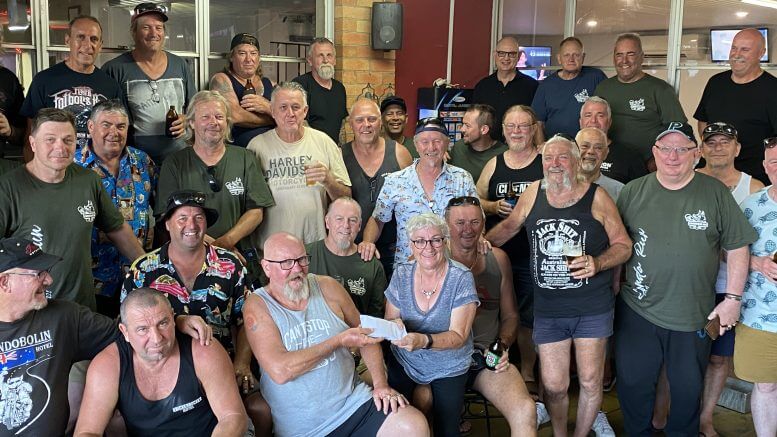 Manfred Wittek, from the Wild Dogs, presents Susan Bennet, president of Condobolin Rotary Club, with the $3,100.00 they raised from giving members of the public rides on their bikes from outside the Condobolin Hotel Motel on Saturday morning the 20th of February. 90 of the WIld Dogs came to town on the races weekend. They have been coming to Condo every year for 16 years to help raise funds for worthy causes in the town. Next year they would welcome any sponsors to help add to their fundraising.Image contributed.

The Wild Dogs roared down the main street of Condobolin on Friday the 19th of February to do their usual fundraising for Condobolin.

The boys started raising funds through offering rides to the public on their motorcycles for a gold coin donation. This proved very popular and the boys have been riding back into town ever since.

Unlike the stereotypical biker gangs the Wild Dogs are a group of workers and businessmen from Sydney who enjoy their bikes and trips away.

The Wild Dogs have sent through a big thank you to Condobolin for welcoming them back to town.

This year was their 16th Annual Ride to Condobolin for the Condobolin Races Weekend. They had 90 gentlemen attend this year.

As with previous years they had rides for the local children and adults on Saturday morning and ran a couple of raffles of prizes donated by the boys and all the boys contributed to the contribution collected, which was donated to the Condobolin Rotary Club. Between rides and raffles they raised and donated $ 3,100.00 which was presented to Sue Bennet, President of the Condobolin Rotary.

The Boys wanted to mention their long time Condobolin friends who help them out every year. Without their help they say they would struggle. So a big thank you to Angel Lewis, Adam RED Lewis, Leanne Pawsey, Michelle Brown and Sue Thompson.

The Boys said they all love coming out to Condobolin for the weekend and have never had any trouble considering how many of them come to town.

This year they filled up the accommodation at the Alambie Motel, Condobolin Hotel, Condobolin Motor Inn and also had a few guys staying at the Railway Hotel. They all had meals at a number of venues and drinks at all the Hotels, the Golf Club and the Railway Hotel Bogan Gate. As well as spending on accommodation and food they also purchased fuel for their Motor Cycles.

The boys finished by saying thanks to Condo and promised to be back next year.