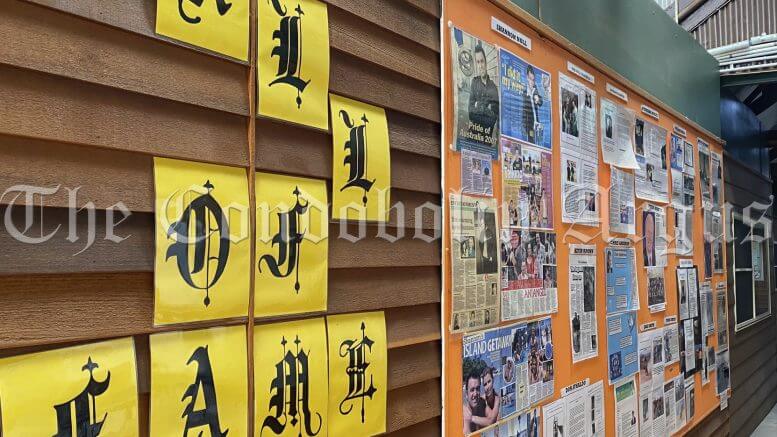 Western Plains Regional Development has a ‘wall of fame’ on display in their building, commemorating Condobolin’s most successful athletes, war heroes, musicians, community workers and politicians.

Shannon Noll – Singer/Songwriter
Condobolin’s homegrown pop-rock singer/songwriter, Shannon Noll, rose to stardom after earning runner up honors in the 2003 debut season of Australian Idol. Born September 16, 1975, Nollsie spent most of his formative years on his family’s sheep, cattle and cropping property at Condobolin.
After his father, Neil Noll, passed away in 2001, and the drought wreaked havoc over the family farm, they were forced to sell and move to town.
Nollsie then spent time working as a shearer and playing alongside his brothers in their band ‘Cypress,’ before he rose to fame as a solo artist in 2003. In early 2004 he issued his debut single, “What About Me,” which not only topped Australian charts but also reached the number two spot in Ireland and he has since secured a very successful career.
Noll and his now wife, Rochelle Ogsten began their relationship in 1997 and welcomed the arrival of sons Cody in 2001 and Blake in 2002. The pair wed in October 2004 and daughter Sienna arrived in 2006. On December 30 2018, Shannon and his family welcomed the birth of miracle baby Colton. The family have recently moved to a small acreage on the outskirts of Sydney, where Shannon is focusing on his family life, growing a veggie patch and renewing his wedding vows.

Patrisha Hurley – Community Worker
Patrisha ‘Pat’ Hurley was born on 2nd July, 1937, and has been a noteworthy and influential member of the local Condobolin community.
Pat attended school in Condobolin and began her first job as a Cadet Journalist at The Lachlander.
In 1956 she married Bill Hurley and took up residence at ‘Kalabra,’ 100km North-West of Condobolin, where she raised four children. In 1970 Pat joined the Myamley CWA branch and in 1987 she was elected Oxley Group President.
Shortly after she became a representative on the State Executive and in 1994 she served a three year term as state vice president, before being elected president of the CWA of NSW in 1999.
In the year 2000 she was chosen to carry the Olympic Torch and in 2003 she was awarded the Centenary of Federation Medal for service to the state and community. Her contributions and dedication to the Country Women’s Association and local community saw her awarded with an Order of Australia Medal in 2004.
Pat Hurley remains an active member of the community, serving as Myamley branches’ secretary and a volunteer for many local events and organisations. She is now also a proud grandmother of eleven, and a great grandmother of twelve gorgeous children.

Chris Anderson – Rugby League Player
Chris Anderson is an Australian rugby league player and coach who was born in Condobolin on the 2nd of May 1953.
Chris began his rugby career as a member of Father Murray’s ‘famous five sevens’ at St Joseph’s School Condobolin. He later attended Red Bend Catholic College, or Marist Brothers College, as it was back then. It was there that one of Anderson’s teachers introduced him to a legendary Canterbury official; Peter “Bullfrog” Moore.
“Bullfrog” recruited Anderson for the Canterbury club and Anderson later ended up marrying one of Moore’s daughters, Lynne, who is now chairwoman of the Bulldogs club and chief executive of Paralympics Australia.
Anderson played as a winger for the Canterbury Bulldogs and represented New South Wales and Australia. He became the first ever player to score a hat-trick of tries in a State of Origin match. As a coach, Anderson took Australia to World Cup victory and coached both the Canterbury Bulldogs and Melbourne Storm to premiership wins.
A stress-induced heart attack while coaching the Kangaroos on the 2001 Ashes Tour against Great Britain nearly brought down his distinguished rugby league career, but he thankfully recovered and still enjoys the game today.

Peter Beattie – Politician
Peter Beattie is a former Queensland Premier who served from June 1998 to September 2007. Born on November 18, 1952, he is the fourth son and the youngest of seven children of Arthur and Edna Beattie of ‘Roma’ Condobolin.
When he was four years old, his mother died suddenly, aged 38 years.
His older sisters looked after him. He started his education at Condobolin Primary School and when he was seven years old his eldest sister married Joe Kiss.
Peter was then sent to Atherton to be reared by his maternal grandmother Mrs Annie Esbenson.
He was both School Captain and Dux of Atherton State High School and went on to the University of Queensland to complete a Law/Arts degree. After working as a lawyer, Mr Beattie became State Secretary of the Queensland branch of the Australian Labor Party from 1981 to 1988. He was elected to state parliament in 1989 and from July 1995 he served as Health Minister before becoming Opposition Leader on February 19, 1996.
After forming a minority government in 1988, Mr Beattie’s government was re-elected three times. Mr Beattie is now a husband, father, author, Companion of the Order of Australia, Professor and Commissioner for the Australian Rugby League Club.

Todd and Jacob Smith – Motocross Riders
Todd and Jake Smith are world-renowned motocross riders. Having begun riding at age three in Condobolin and competing in notable races such as the Australasian Safari, Finke Desert Race, Hattah Desert Race, Dakar Rally and Condo 750, they are experts in their sport.
Most notably, Todd and Jake finished in first and second place at the Australasian Safari in 2011 and again at the Finke Desert Race in 2013.
Todd married Amy in 2012 and together they have 3 children, while Jacob and his wife Rhiannon welcomed their first child, Bodhi, in 2020.
Todd retired from racing in 2016 but still manages to get back on the bike very now and again, while Jacob has set no date on his retirement yet. Most recently, they both competed in the Finke Desert Race, with Jacob finishing in 9th position, closely followed by his brother
Todd in 11th. The pair both work at their family business, G & S Smith Fabrications in Condobolin and will be forever known as motocross heroes.

But that’s not all…
Head down to WPRD to read more about Condobolin’s best and brightest.