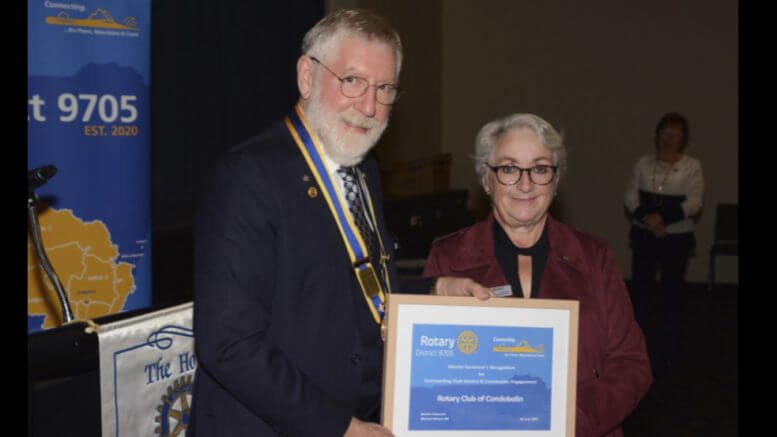 The Condobolin Rotary Club has been recognised for its commitment to the local community.

On Saturday, 26 June, 2021 the first 9705 District Changeover Dinner was held at Young Services Club at which the outgoing District Governor, Michael Moore, presented awards to individuals and clubs recognising the service they provide to their relevant towns, areas and the Rotary as a whole.

Condobolin Rotary Club was recognised with an award for outstanding service and community engagement, one of only a handful of awards presented to clubs on the night.

President, Susan Bennett, was in attendance and accepted the award from Michael Moore who cited a number of reasons for the award.

These included a achieving a 100 per cent increase in membership over the past two years despite a decline in community service volunteering, successful partnerships with other organisations such as The Wild Dogs Condobolin Ride who have contributed to Rotary’s fundraising for the past two years and for their successful Drought Relief Program which saw around $30,000 raised and distributed to families in need of support.

In accepting the Award, President Susan, thanked the District Governor and briefly spoke about small clubs being just as effective as the larger ones when working within their community.

“Less members just means more involvement and commitment from all club members and a greater emphasis on effective and achievable projects for the Club,” she explained.
Rotary in Australia is celebrating its 100th birthday this year. Condobolin Rotary Club meets the second and fourth Tuesday of each month from 6pm at the SES Unit, 19 Marsden Street in Condobolin and welcomes guests to its meetings.