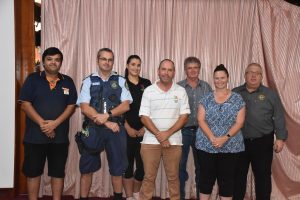 Licensees from local pubs and clubs, together with licensed liquor retailers and limited liquor license holders, have met recently with police and local government representatives to resurrect the Condobolin Liquor Accord.
The purpose of the Liquor Accord is to identify ways in which local licensed venues can better operate to ensure a safe and enjoyable experience for patrons.
The Condobolin Accord has come out of the blocks running, arriving at strategies to enforce a consistent message that anti-social and violent behaviour in and around licensed venues will not be tolerated.
Effective immediately, the Accord has come up with a common barring policy, meaning that if you are barred from one licensed venue in Condo for a given period of time, chances are you will be banned from entering any licensed venue in Condo.
This measure particularly targets (but is not limited to) those involved in physical violence or malicious damage, anybody who verbally threatens staff or other patrons, and those who are drug-affected or peddling drugs in and around licensed venues. The days of causing trouble in one pub or club and simply moving on to the next one are gone!
The Accord has also come up with a policy on under-age drinkers meaning that any unaccompanied minor found in a licensed venue will receive a warning, and that if they ignore the warning and re-offend, they will be barred from all licensed venues in town once they turn 18 for a period of up to 12 months.
The benefits of the Accord will flow to the venues themselves, to patrons and to the wider Condobolin community through strategies aimed at reducing alcohol- and drug-related assaults; reducing the amount of anti-social behaviour in venues and the community; and reducing levels of under-age drinking.
The Accord’s policies are at the very least either the law or just plain common sense, and aim to keep our community safe and strong. Contributed.