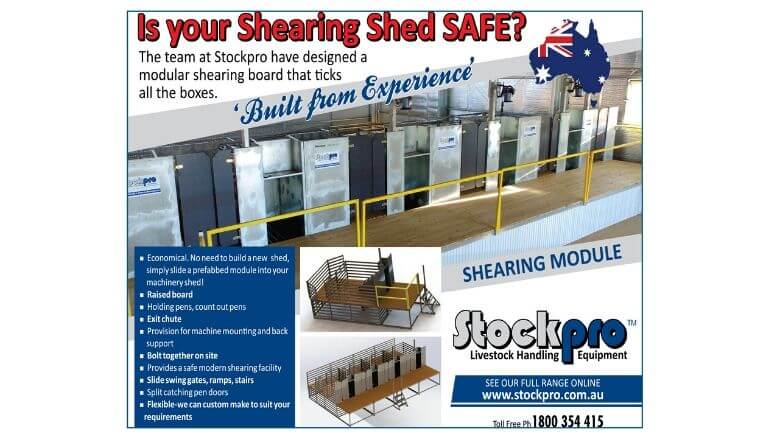 Adam and Graham Wallace along with wives and family operate a sheep enterprise at Cowra NSW, running a self-replacing flock of about 4400 ewes, with half being joined to terminal sires.

Their old shearing shed was a wooden structure and in Adam’s words, “a bit of an OH&S disaster, with days being spent before shearing patching things up to get it ready”.

Graham visited the Stockpro site a couple of years ago at the Orange Field Days. He was very impressed with the shearing module that was on display, noting it looked very well built and more solid than others he had seen, much like the Stockpro cattle yards Adam’s father in law had recently installed. Improved efficiency and health and safety were large driving factors behind the Wallace’s decision to purchase the new shearing modules, bearing in mind their sheep were their main asset.

The fact the shearing modules are made in Condobolin by Stockpro also played a part in their decision making, both wanting to support Australian made products. Graham also stated they liked the fact Stockpro were local, easy and friendly to deal with and always accessible. The modules were installed in September 2019. They have found the sheep move through very well and everything flows smoothly. They especially like the front filling pens and sloping catching pens.

Feedback from shearing teams have been very positive with some taking pictures to encourage other producers to follow in the same direction. The Wallace’s feel another bonus of the modules is that shearers enjoy working with them. The Wallace’s have found the quality of the modules and service second to none.

Installation was quick and easy as the modules come fully welded and are effortless to move around. They would happily recommend Stockpro shearing modules to other sheep producers.