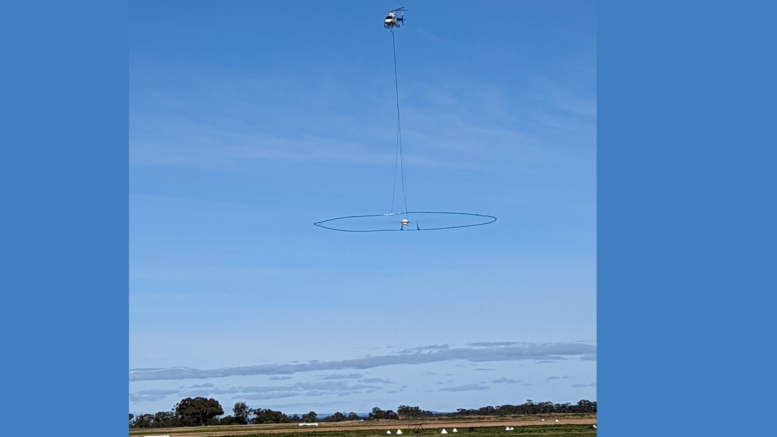 The helicopter flying the survey test line at the Tottenham aredrome.

In late June, Locksley Resources Limited, an Australian exploration company, completed an airborne survey in the Tottenham area.
The company runs the Tottenham Project that covers approximately 470km2 about the town. The Tottenham Project includes two deposits, Carolina and Mount Royal – Orange Plains. Other targets have returned encouraging copper-gold intersections that require further testing. These include: Bogan River Mine, Ace Mine, Jimmy Woodser Mine, Underlay Mine and Burdenda.
Copper was first discovered at Carolina Mine in 1872. The Mount Royal – Orange Plains deposits were found in 1884. The Nelson – Underlay deposits were found in 1899.
“Locksley is exploring the former copper mines at Tottenham with a view to establishing an economic project. To date, work has concentrated on defining the current known deposits at Mount Royal – Orange Plains and Carolina. This has resulted in defining a resource of 9.86 million tonnes at 0.73% copper, 0.22 grams per tonne gold and 1.7 grams per tonne silver.” wrote Operations Manager, Ian Cooper.
The survey conducted was an airborne electromagnetic survey that was flown in over 1066.2 line kilometres via helicopter to locate areas of conductive ground, that may hold metals. This has been highly effective in detecting copper orebodies in the region previously. The data is currently being processed and results are expected in August.
“Electromagnetic (EM) surveys can be used to help detect a wide variety of mineral deposits, especially base metal sulphides via detection of conductivity anomalies which can be generated around sulphide bodies in the subsurface. EM surveys are also good at locating ground water, particularly saline ground water.”
Sources: locksleyresources.com.au and Operations Manager, Ian Cooper. Image Credits: Ian Cooper. 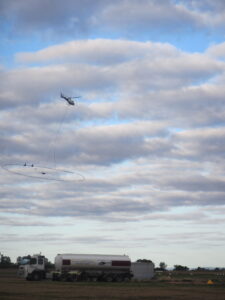 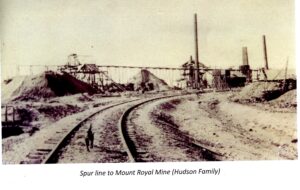