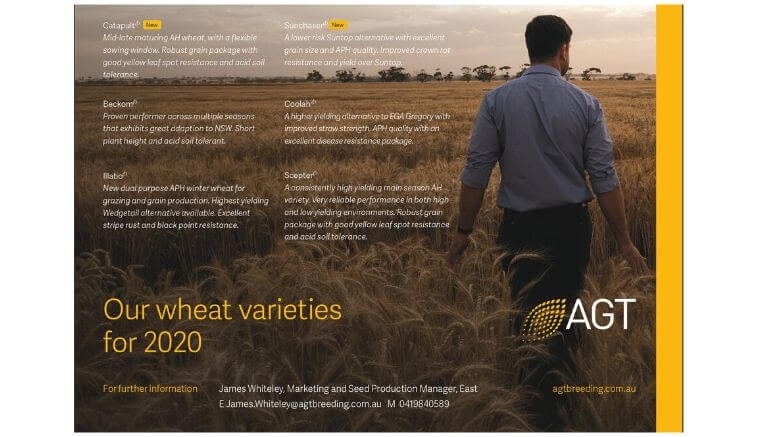 Despite being bred as a dual-purpose winter wheat to suit mixed farming enterprises, the versatility of Australian Grain Technologies’ Illabo variety means it still has a fit in grain-only systems. This is exactly what New South Wales grower Brendan Pattison, Marrar, found when he trialled Illabo in 2019.

“I am a continuous cropper with no livestock, so I haven’t grown a winter wheat for a long time,” Brendan said. “However, I was interested in trialling Illabo as a prime hard early sowing option to not only capitalise on early rainfall but to also to utilise and access residual moisture in the profile.”

Illabo was trialled on Brendan’s property sown early-mid April achieving a yield of 2.2t/ha producing good test weights and low screenings which was a pleasing result given the season. “As I have a grain-only enterprise, I am looking to achieve a higher harvest index and Illabo definitely delivered on that,” he said.

Illabo’s winter habit and later maturity was an attractive trait for Brendan as he believes that it could help to mitigate frost risk, while its resistance to stripe rust and black point are also big positives.

He says he is interested in trialling Illabo again in 2020 on a larger scale to further evaluate how it fits in his farming system.

While most growers are utilising Illabo for increased early dry matter production over other winter wheats varieties for grazing, Brendan is hoping the early sowing will result in less risk and more yield come harvest time.

“I will aim to sow Illabo slightly earlier this year and see if it will maintain its performance in a year with less residual moisture than 2019”.

Illabo has an APH classification for the South Eastern Zone of NSW. Commercial quantities of Illabo are available through AGT Affiliates, the AGT Seed Sharing Initiative or local retailers.